Last night I stayed up late gazing at my Colombia itinerary & gloating. I’ll be traveling in Colombia most of the month of July.

I mostly live such a quiet life, editing & reading & making art in solitude. But I grew up sleeping under mosquito nets & using an outhouse & shoveling our mostly organic trash into pits my dad dug in the backyard, & feeding the chickens & trying to identify rocks from the river beach & helping to push our rattly old jeep out of muddy ditches. And playing under downspouts & in the rain barrel during wild tropical thunderstorms! And listening to the bats fly around under our roof at night, & sweeping up their pellets every morning (don’t worry, bat droppings are small & dry). And . . . doing my school assignments & reading & writing & making art. (Re the art: I sometimes paged through a couple of books of crafts for children, brought or sent from the United States; there were fascinating things to make, but many of them called for exotic objects like egg cartons, which weren’t a part of our life in remote southern Colombia. So often I just went back to pencil drawing. Sometimes it was making clothes for paper dolls.)

Consequently, my adult adventuring is a little eccentric. I actually feel at home in places with only outhouses, with no electricity, with mice & cockroaches running around. I hate the latter if they ever venture into my Chicago condo, but in a little house in the rainforest they are just normal! I’m not any kind of athlete, so the physical challenges I deal with are on the level of surviving uncomfortable bus or canoe rides. (Fortunately my body bounces right back from those.) But I love being in remote places & admiring the skill & ingenuity with which people harvest or hunt their food & then prepare it, or navigate rivers, or build a dwelling in just a few hours. And of course the little towns where I lived as a child are much larger now, & there are wise inhabitants who are helping their neighbors heal from violence, or plan to improve the hospital, or who have established distance learning programs so that people can earn college degrees.

Grinning absurdly because I felt so happy to be on a Colombian river again! Pacurita River, Chocó, Colombia, February 2014. Photo by Michael Bracey, who more recently did the photography for Picturing God.

During this trip I’ll be on a river in Caquetá Department, where I’ve never been before. I’ll be visiting dear friends from childhood there & in Huila, Putumayo, & Nariño Departments. A couple of us will be taking a long bus trip on an impossibly narrow mountain road with switchbacks & sheer dropoffs. My family took that trip many times in my childhood, but it’s very dangerous–we hope to help call attention to its poor condition as part of pressure to gain funding for a new, safer route.

After this I go north along the Andes. I will be reading my picture book Los ángeles de Adriana to preschoolers in a low-income Medellín neighborhood & giving copies away, & I’ll be interviewed at a community radio station there. This is all part of the work of a wonderful grassroots organization promoting literacy & culture. I’ll also visit friends from my teenage years in this city.

Then it’s off to Mampuján, Bolívar, where my photographer friend Mike Bracey & a couple of videographers will join me. We’ll get to witness firsthand the witness art of a group of Afro-Colombian women who won Colombia’s Peace Prize in 2015. Then, as if that weren’t enough, we’ll trek to La Guajira Department to visit a Wayúu indigenous community that suffered a terrible massacre & displacement some years ago but has been able to return to their land, now a national park, & serve as its guardians. Maybe we’ll get to see the flamingos too!

There are no words for how privileged I feel to embark on these adventures! And afterward I’ll come home & resume my life of editing & reading & writing & doing laundry, making soup & making art. But the memories will be little fires that I can return to again & again, & some of these experiences will branch into new adventures in the years to come.

Like most writers, I hate rejections–those polite “doesn’t meet our needs at this time” emails. Another one of them came yesterday. I have cultivated a thick skin, but that doesn’t mean I don’t care.

Then there are the prizes, which always seem to be won by someone else–usually somebody younger, which is objectively not surprising since I’m in my sixties. They have an edge of genius I lack. I’m mediocre.

Or sometimes: They have a spouse or partner whose income & presence allow them much more time to write & revise & learn than I have, being single.

There are also “self-rejection” moments when my struggle to make a poem find its path seems to be failing. Should I just give this up? Maybe I’ve reached the limits of my capacity.

Most of the time I manage to keep my eyes on the actual prize: making this poem or story better, trying a new subject or style, uncovering & strengthening the inherent rhythm of a piece.

But sometimes I really need encouragement from someone else. From June 2011 until her death in November 2015, Helen Degen Cohen was a poetry mentor to me, though we didn’t name the relationship in those terms.

Helen was brilliant & restless & insomniac & loving. She was a cofounder of the splendid RHINO Poetry annual, & she did win a number of distinguished prizes, residencies, & grants. She invited another poet, Susanna Lang, & me to form a critique group with her.

And one day, when I was beset by those doubts about the value of my work, Helen responded, “You of all people should not worry about that.”

Really? Of all people?

That in itself was a prize. Helen knew my work, understood what I was trying to do, & found it important.

So rejections come, but I keep writing. Our stories & poems & art can be part of something bigger than fame & recognition. And I want to be one of those “you of all people” encouragers who notice others’ work, affirm it, name what’s important in it. We really do need each other.

Helen adored gardening. This is one of her own photos.

My spiritual director asked what colors I would use to paint you.

Indigo, brightening in places to cobalt. The deep poignant blue of a summer sky at twilight, what I used to call Maxfield Parrish blue.

Variegated with rich greens for life and fruitfulness. And pricked with reds and oranges, sharp but beautiful cuts.

Mostly I live in solitude, not loneliness. But the painful moments of aloneness come, and they no longer frighten me. You have become a kind of friend.

You are a hollow place inside me, and I meet God in that very emptiness. You are sorrow and loss, you are longing, hunger.

Without you, what art would I make, and who would I be?

The reason we are not able to see God is the faintness of our desire.—Meister Eckhart

I’ve been thinking about desire—the different kinds of desire, what happens when we lack desire or mistrust it. I think desire is a great gift. Without it we are creatively blocked. Wanting and not (yet) having: that’s a tremendous force that lies behind all our risk-taking.

When I accompanied the Cacarica community in NW Colombia for six weeks in 2003, the army and paramilitary forces that had been harassing them chose not to make an appearance. We all remained on our guard, but there was time and space just to live—to cook, wash clothes, fish in the river, get to know one another.

It turned into a sort of artist’s retreat for me. Each day I spent at least an hour writing, recording interesting experiences and what I was learning of the community’s history. Further, I had brought along my chalk pastels and a couple of pads of drawing paper, and I let people know that I wanted to draw portraits of them. After I sought out the first couple of subjects and they saw I was serious, community members—especially children and teenage girls—flocked to the guesthouse porch every day saying, “Dibújame,” draw me. Some days I did as many as four portraits. 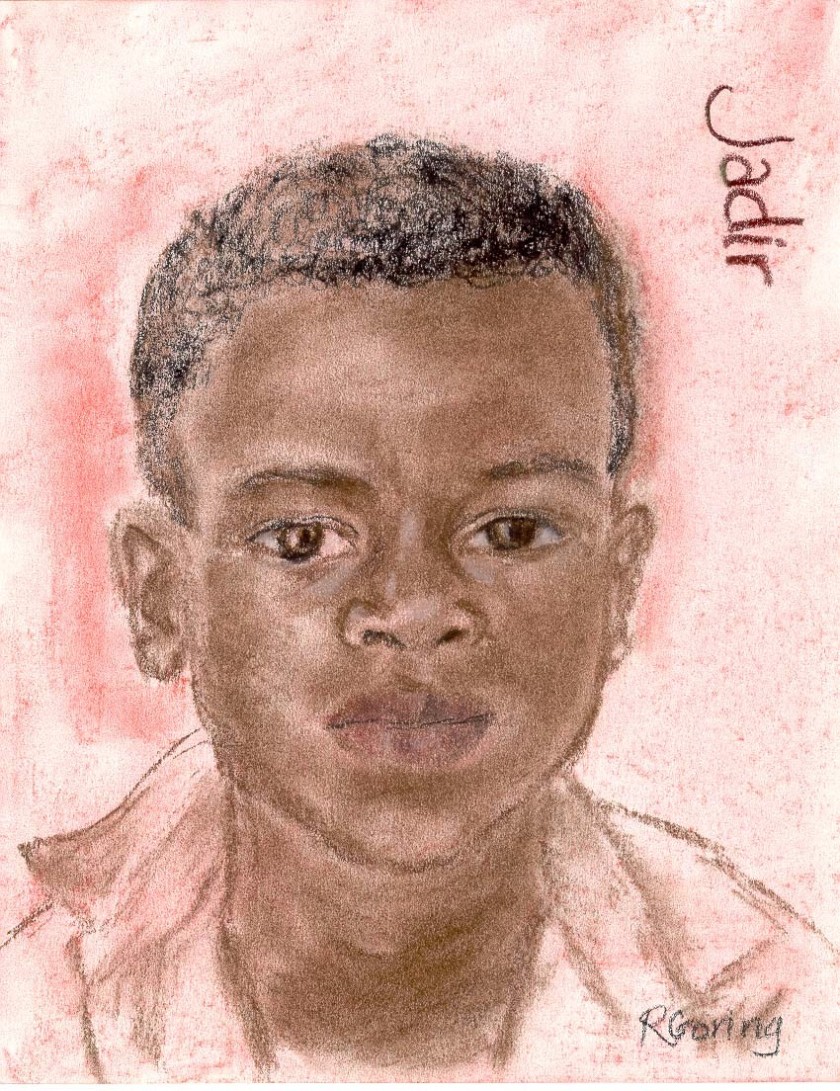 I had also brought a set of Prismacolor pencils and some card stock, and I used these to draw some of the plants native to that area of Chocó—one of the most biodiverse regions of the Western Hemisphere. On days when I was tense, I learned that focusing my consciousness on rendering the minute variegations of color and light on the surface of a leaf could bring me into a profound and healing silence. (Sorry, I’ll have to share one or two of those images later/elsewhere!)

Simultaneously I was giving the community protective presence and growing as an artist, feeding my hunger to capture the sheen of sunlight on dark skin or on a guinea leaf (a local name, pronounced with a hard g: gi-NEH-ah).

When I went to Jiguamiandó afterward, there was no opportunity to so much as open up my box of pencils. Paramilitaries were nearby and entering the Puerto Lleras settlement every day. We focused on survival; we listened to the community leaders’ anxious arguments about what to do; we gulped down our food and tried desperately to make satellite phone contact with a human rights office in Bogotá. It was decided that we would all evacuate.

I didn’t draw (though some yellow plantain blooms begged to be interpreted), and I took time to scribble only a few words in my journal. I did roam Puerto Lleras with my camera, taking photos so the people would have some visual record of the thatch-roofed homes they were being forced to abandon. And on the last morning, between the paras’ unwelcome incursions, I sat with a circle of children and we taught each other favorite songs.

* * *
Sometimes—often—our deep desires conflict with each other because of circumstance. If we want well and love well, we can figure out what gift is to be given now, what must be left for another time, what can be sacrificed. We honor our deepest wants, make something holy by giving it up for love, and hope for God’s restoration, satisfying our needs in a parched land.