Note: title links allow you to purchase from the publisher, or from the vendor it uses for sales. You can also find these books on Amazon and the websites of other vendors. See “Press” tab (menu upper right of this page) to read reviews of my recent books.

Isaiah and the Worry Pack

It’s bedtime again, but Isaiah can’t sleep. It seems he’s got too many things on his mind: things he’s worried about. So Mom helps Isaiah imagine what it would be like if each of his worries were a block that he could stash in his backpack.

As Isaiah imagines hiking through the woods carrying his worry pack, he discovers the joy and relief of trusting Jesus with everything—especially those worries.

This tender story written by Ruth Goring, paired with Pamela C. Rice’s warm illustrations, will be enjoyed by children and the adults who read with them. Also included is a note from the author to encourage further conversation about the content.

With poetic language and gorgeous handcrafted mixed-media collages and mosaics, Picturing God brings to life the many metaphors for God found in the Bible. God is the light, living water, a father, a mother, clothing, a rock, wind, comforter, a door, the Good Shepherd, and more. Poet and artist Ruth Goring invites children and adults alike to revisit the beautiful imagery found in Scripture and provides an opportunity for children to develop their imagination about who God is.

At the end of the book, a list of Bible references is provided for each image depicted for families to look up and learn more about the Bible’s many ways of picturing God.

Book2look page where you can see the whole book!

Free discussion guide for parents & teachers to use with children

“Colorful, richly textured, and wildly creative, Picturing God is a delight. Ruth Goring’s visual and literary exploration of the many names and metaphors for God will open readers’ minds and hearts to that Word who is love. I love this book!”
—Jennifer Grant, author of Maybe God Is Like That Too and Maybe I Can Love My Neighbor Too

“We need more books that help children envision God in ways that go beyond an old white man with a beard. Picturing God provides beautifully illustrated and poetic images that are straight out of Scripture. I smiled along with every page.”
—Traci Smith, author of Faithful Families: Creating Sacred Moments at Home and Prayers for Faithful Families: Everyday Prayers for Everyday Life 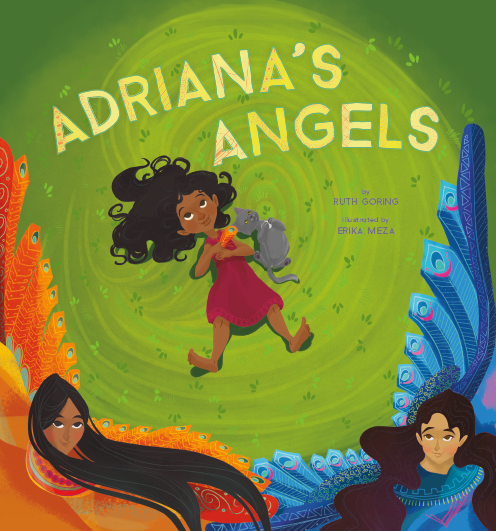 Two angels, Milagros (miracles) and Alegría (joy) wield their protective power surreptitiously and sometimes with a hint of humor, listening constantly for God’s direction as they watch over a little girl named Adriana. Adriana and her family are forced to flee their home in Colombia and start a new life in Chicago. Throughout difficult times, big transitions, and the ordinary moments of a child’s life, Adriana’s angels whisper messages of God’s love and presence.

Adriana’s Angels encourages faith, wonder, and compassion. Many children who read or hear this story will grow in empathic identification with refugee and other immigrant peers. Their sense of God’s attentive care for themselves and others will deepen, particularly through the angels’ ministry to Adriana as she sleeps. Children who have experienced trauma often relive it unconsciously at night—which is why the Spirit’s mysterious healing work in sleep is so important.

“Adriana’s Angels is an engaging narrative with mesmerizing visuals. It tells a faith story, from a young child’s vantage point, of a journey from Latin America to asylum in Chicago, which has long been a destination for those seeking opportunity. Yet Adriana discovers that the place of escape also has challenges. This book offers comfort and confidence for children and adults alike, reminding them that God is always present in life’s difficult journeys.” — Curtiss Paul DeYoung, executive director, Community Renewal Society, Chicago

“In these unusual and evocative poems, Ruth Goring exposes a Colombia far more complex, anguished, and painfully beautiful than anything you will read in the news. The tragic and horrifying become everyday, and the everyday is revealed in its tragedy and horror. We are taken to the heart of Colombia’s war against the poor with a language that is lush and compelling. If you want to experience Colombia’s conflicts with all of your senses as well as your intellect, Goring’s poetry will take you there.” — Aviva Chomsky 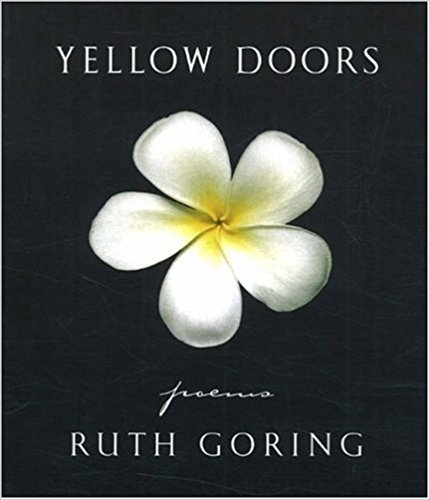 Each poem in Ruth Goring’s debut collection opens a door into undiscovered countries: urgent rivers, wordless giants, soul-stirring music, fathers never known, voices that beckon and fade. Here are sorrow and sweetness, heartbreak and hope. The mundane is here, and also the numinous. At times they switch places. And in the strangeness of these landscapes the familiar is revisioned.

“Rooted in the earth of this world but stretching, stretching for heaven.” — Jill Pelaez Baumgaertner, poetry editor, The Christian Century

Photographer Michael Bracey and I self-published this collection of photos of Afro-Colombians, with bilingual text (English and Spanish) about their history and their communities, our time among them, and profiles of some of their courageous and indefatigable leaders.

From the foreword by Steve Bynum: “A prayerful meditation anchored in the Eastern Christian concept of ‘co-suffering love.’ Ruth Goring and Michael Bracey empty themselves (kenosis) for their subjects, through the godly and universal concepts of fellowship, empathy, justice, and humankind’s inherent goodness. Their work bears witness for those who at times endure unimaginable hardships. Yet the book’s genius is in its ability to relay a people’s inspiring, dogged determination and certainty of purpose.”

Purchase directly from us here! (Via Paypal or your credit or debit card.)

Some anthologies in which my work appears:

What Saves Us: Poems of Empathy and Outrage in the Age of Trump, edited by Martín Espada

This is an anthology of poems in the Age of Trump—about much more than Trump. These are poems that either embody or express a sense of empathy or outrage, both prior to and following his election, since it is empathy the president lacks and outrage he provokes.

There is an extraordinary diversity of voices here. The ninety-two poets featured include Juan Felipe Herrera, Richard Blanco, Carolyn Forché, Patricia Smith, Robert Pinsky, Donald Hall, Elizabeth Alexander, Ocean Vuong, Marge Piercy, Yusef Komunyakaa, Brian Turner, and Naomi Shihab Nye. They speak of persecuted and scapegoated immigrants. They bear witness to violence: police brutality against African Americans, mass shootings in a school or synagogue. They testify to poverty, the waitress surviving on leftovers at the restaurant, the battles of a teacher in a shelter for homeless mothers, the emergency-room doctor listening to the heartbeats of his patients. There are voices of labor, in the factory and the fields. There are prophetic voices, imploring us to imagine the world we will leave behind in ruins lest we speak and act.

However, this is not merely a collection of grievances. The poets build bridges. One poet steps up to translate in Arabic at the airport; another declaims a musical manifesto after the hurricane that devastated his island; another evokes a demonstration in the street, an ecstasy of defiance, the joy of resistance.

The poets take back the language, resisting the demagogic corruption of words themselves. They assert our common humanity.

Aeolian Harp 3
Representing a breadth of renowned contemporary poets, with varying aesthetics, this third volume of the Aeolian Harp Series showcases the talents of ten poets as they revel in the fierce joy of writing. In this anthology Devon Balwit, Ruth Goring, Peter Goodwin, Lana Bella, Andrena Zawinski, Lois Marie Harrod, Petra Kuppers, Karen Schubert, Marc Frazier, and Hedy Habra reveal the best of their work and their underlying philosophies.

Misrepresented People: Poetic Responses to Trump’s America
The poets anthologized in Misrepresented People: Poetic Responses to Trump’s America bear witness to, rage against, and defy the misogyny, racism, homophobia, xenophobia, and authoritarian impulses that have always surrounded us, but that are incarnated in the 45th president. At a time when large swaths of the nation, and of the world, have succumbed to a reality television ontology, the poems collected in this volume offer the terra firma of imaginative empathy only available to us through poetry. This anthology contains work from a variety of aesthetic stances, from poets whose personal backgrounds reflect the vibrant multiplicity of our democratic vistas at their most resplendent. These voices counter alternative facts and fake news with the earned communion and the restorative utterance of the lyric and of the narrative. Proceeds from this anthology will be donated to The National Immigration Law Center.

Glass Lyre Press adds: After we have taken care of production, printing and distribution costs, we will donate a portion of sales to Doctors Without Borders and the Red Cross.

Of Earth and Sky: Spiritual Lessons from Nature
From the fragrance of a single flower to the majesty of a mountain range, nature inspires great writing. Of Earth and Sky, edited by Thomas Becknell, is an anthology of poetry and prose from more than thirty of our finest classic and contemporary writers, their literary selections illustrating the seven virtues of prudence, fortitude, temperance, justice, faith, hope, and charity as they are revealed through nature.